Built on the foundations of a rich lore

Early on, we wanted the game to have a substance, a theme or atmosphere that was indicative or something though-out, something bigger. We wanted the game to feel like it was just a small part of a much bigger, richer world, a small part of a long history. So although we currently do not have any plans for a Single Player campaign, we set off to create a back-story, filled with incredible details on all of the characters, the background, locations, events, technology, weapons and other parts of the world. This would not only help with the style and design of the game's elements, but also help maintain a consistency throughout the various levels and characters, giving them a sense of purpose, a place. With Vertex, every weapon has a history, an origin born out of necessity from the world's lore and adapted to the current timeline it is represented. From the mundane subway station in the heart of the slums, to the observation deck on the Royal Palace, each location is rooted from the narrative, depicting various events and aspects of the lore. 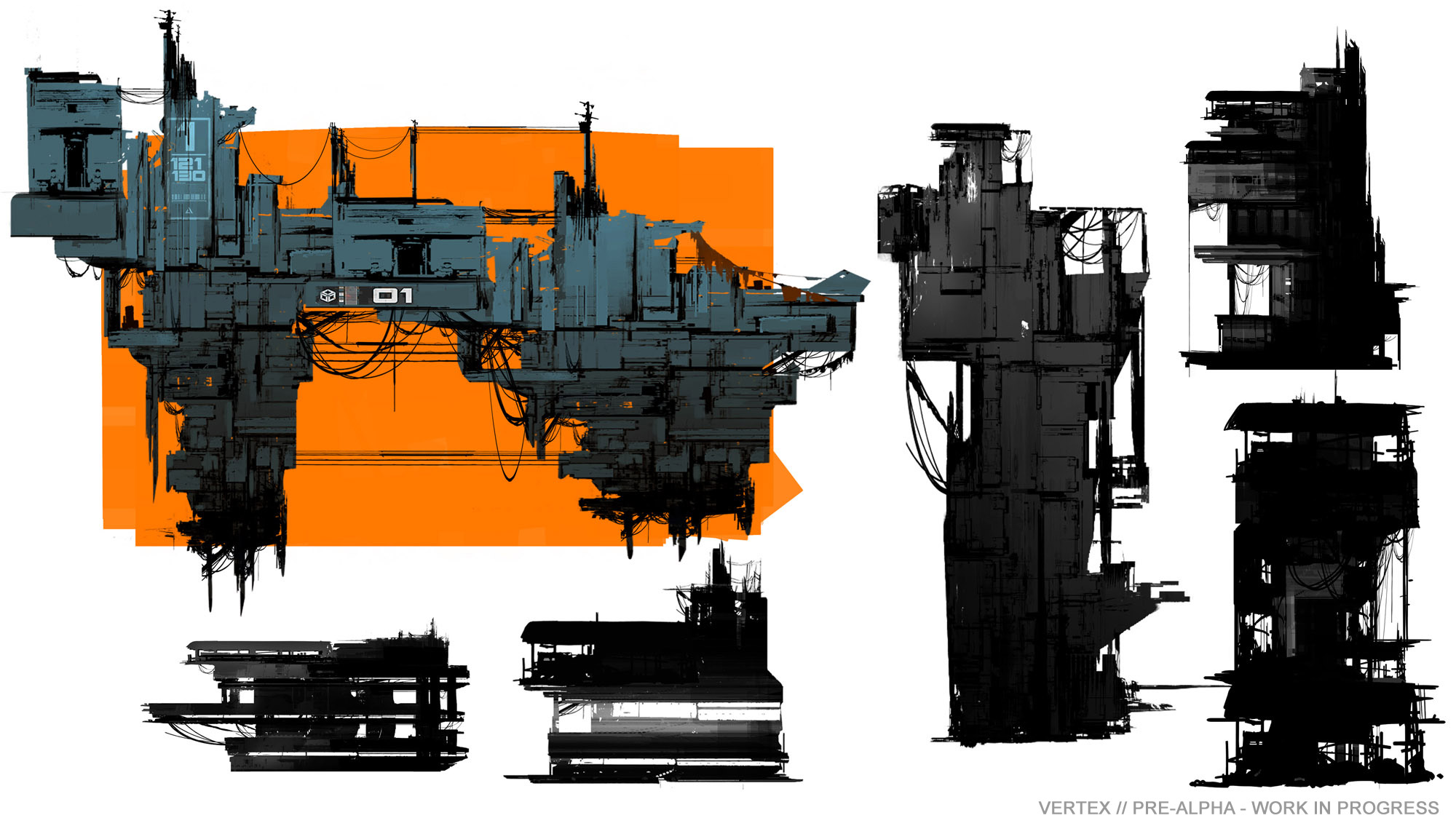 The two main sides (factions) of the game are born of the same world, same war, but have been thrown into highly opposing sides. Character design is meant to well represent these differences. The Vigil, a faction of meta-humans with special abilities, is mostly depicted in the game as having cloth-based attires. Their members mostly being part of the lowest ranks of the population, they sport very little technology or gadgets on them, if any.

On the other hand, Section-8's Advocates are a highly skilled paramilitary organisation under corporate control. Contractors enjoying near-unlimited funds and support from the city officials, what they lack in abilities: they strongly compensate in weaponry. Holding a religious care to their weapons and gadgets, the Advocates rather portrait a sense of cleanliness, efficiency and technology. Their attires will often majoritarily be composed of metals and composites of all kinds. Light or heavy armor platings, cybernetic arms, legs and implants of all types, stripes and orbs of light protruding from various spots: it is easy to spot them in a crowd, unlike the easily forgettable Vigil members. 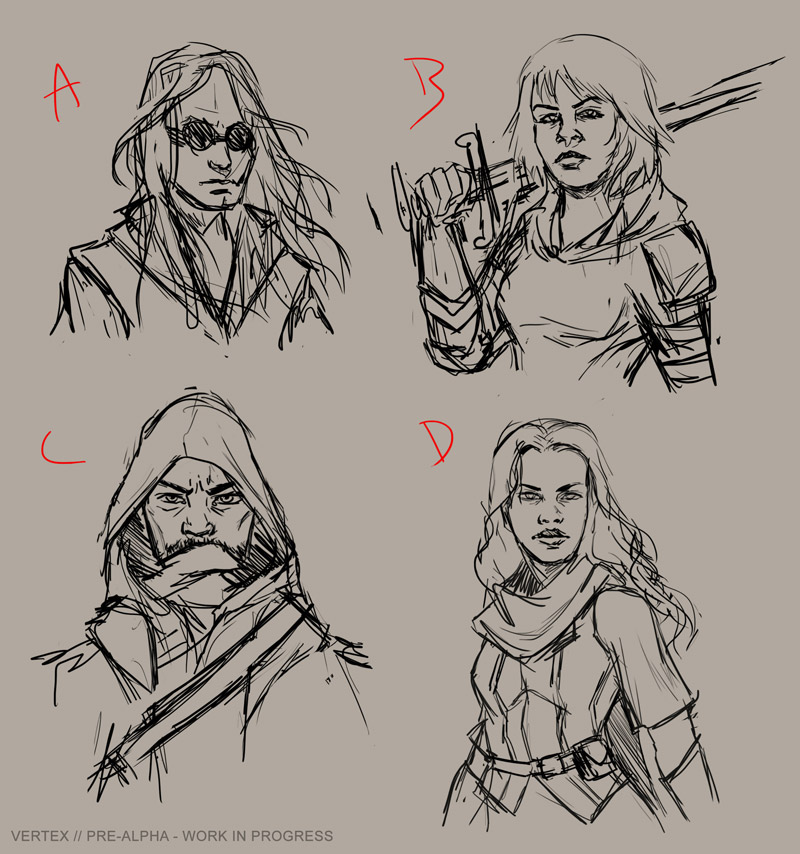 We wanted something futuristic, with advanced weaponry and gadgets, but without the bright and shine of an utopian future. Although the world offers various environments in different climates and settings, the overall feel of the major locations are based on a gritty, bare sort of aesthetic: brutalist industrial. Liberated from the constraints of building upon earth culture, the world of Vertex is a perfect occasion to picture new and incredible sceneries. To discover unique and wonderful places which may seem familiar in some sense, or completely Alien in other situations.

The duality also lives here. The outskirts of the city; arid deserts where the condemned are sentenced to maintain vital infrastructure, crucial to the survival of the city. As you travel more in-land, the location slowly turns from sparse habitations, slums to a more urban setting. Born from being an important industrial hub center pre-war, the city's landscape is surrounded by industrial plants, warehouses and other infrastructure. At its center, the city is an explosion of light and sound as the business center and commercial sections buzz of activity. The skyline shining over the lake, glamorously led by its impressive center-piece: the Vertex Tower. 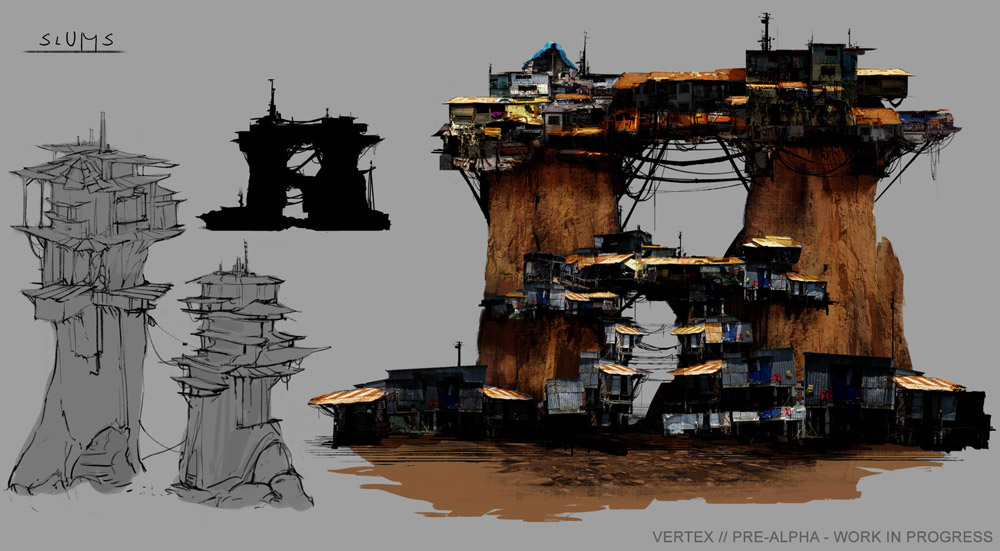 NEXT SECTION     ABOUT - COMPANY